We demonstrate the application of graphs for data analysis and similar entity searches based on the connections.

The interest in graph algorithms has increased tremendously as they are explicitly developed to gain insights from the connected data. Analytics on graphs can uncover the workings of sophisticated systems and networks on a massive scale for any organization.

Everything is driven by connections — from financial to social and biological processes. Explaining the patterns and the meaning behind these connections leads to breakthroughs across industries. “You have a new friend suggestion” on Facebook is a product of lots of algorithms applied on a social connection graph.

Nodes: They are the elements that represent an entity. Nodes can have various attributes (properties) associated with them.

Relationships: They represent connections between nodes. Relationships can also have attributes associated with them.

Graphs: They are a representation of data in terms of vertices (nodes) and edges (relationships) between them. Edges can be directed or undirected.

In a Relational database, data is stored using tables. Any data related to one entity that can have multiple possible values (one-to-many/many-to-many relation) is stored using bridge tables. In the above case, Alice with id 815 is a part of multiple departments. This is represented using multiple records in a bridge table.

To find which departments Alice belongs to, we have to first search for Alice in a Person table, then look for her ID in a bridge table which will give 3 records. Using the ID’s we have to then get the name of the departments to which Alice belongs.

Graph representation of the relational database

In a graph database, we can find the node that represents Alice and then traverse all the BELONGS_TO relations to reaching departments that Alice belongs to (and a lot fewer table joins) 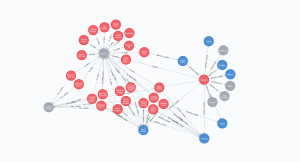 This is a food graph created from this dataset. It contains information about restaurants in Bangalore city. This database is created using the Neo4j graph database. A slice of data is available here. The code and logic to create the graph are available in this repository.

This graph contains information about restaurants in Bangalore city. It contains 5 types of nodes: Restaurant, Dish, Cuisine, Location, and Type(eg: Cafe, Bar). These nodes have 5 different relations among themselves:

A graph is a collection of nodes and relationships. Each connection in a graph represents a relation between two nodes. In terms of a food graph, nodes sharing relationships with the same type of nodes are similar nodes. 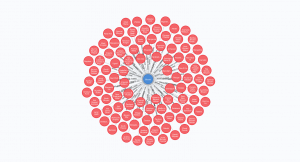 As more and more types of relationships are added to the graph, the similarity search can be fine-tuned.

The mathematical representation is written as

Similar restaurants based on the count of intersections in Banashankari Area

In the above table, we can see that the restaurants “Devanna Dum Biryani Centre ” and “Chicken-pot Donne Biryani House” both have high similarity scores based on their intersection/common connections.

As more and more connections are added to the graph there are more features available to differentiate between restaurants. As the number of intersections between the restaurants increases the quality of recommendations also improves. It is important to understand what kind of connections are created in the graph. Adding the wrong type of relationships in the graph can lead to a decrease in the quality of recommendations.

The query below can be used to find similar restaurants given a restaurant. It computes Jaccard’s similarity between the given restaurant and all the other restaurants in the graph and then displays them.

List of restaurants and their similarity to “Alba — JW Marriott Bengaluru”

In this blog, we learned how to leverage graphs to find similar nodes based on the relationships using Jaccard similarity.

The code is available here https://github.com/deepam8155/SimNode

Hello, I am Deepam. I am passionate about data science. I hope you find my blogs interesting and useful!

It has been an interesting year for me as CoreView got... read more

To cater to this challenge create a blacklist or whitelist the... read more

Getting new business from satisfied existing customers is easier than hunting... read more

About a couple of weeks back, #AirIndia reported their longest commercial flight... read more

"Will you be able to build a web platform that can... read more

How to elevate the productivity of meetings?

Any meeting has three types of participants, those who talk, those... read more

Great Customer Experience is everything. Ace it!

Consider a scenario where you need to walk into a supermarket... read more

Getting attacked by malicious software is a nightmare. They are not... read more