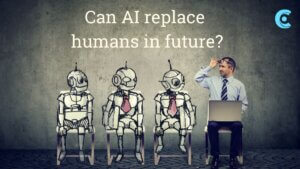 The truth is that AI is already being used in many areas of our lives, from healthcare to transportation. AI is being used to diagnose diseases, drive cars, and even create art. But while AI can do many things that humans can do, it is still limited in its capabilities. AI is not yet able to think and reason like humans do, and it is not yet able to understand complex emotions or make ethical decisions.

That being said, AI is advancing rapidly and it is likely that in the future it will be able to do more and more of the tasks that humans currently do. For example, AI could be used to automate mundane tasks such as data entry or customer service. This could free up humans to focus on more creative and complex tasks.

However, even if AI does become more advanced in the future, it is unlikely that it will ever completely replace humans. Humans have unique qualities such as creativity, empathy, and intuition that AI simply cannot replicate. In addition, humans are capable of making ethical decisions and understanding complex emotions, something that AI cannot do.

In conclusion, while AI may be able to take over some of the tasks currently done by humans in the future, it is unlikely that it will ever completely replace humans. Humans have unique qualities that AI simply cannot replicate, and these qualities will always be necessary for certain tasks.

What’s your opinion on this ?

The Slingshot: Secret sauce of control

“I understand delegation. I am still not able to figure out... read more

Have you utilized your strategic break productively?

“So Makarand, how was your strategic break last week? Did you... read more

I had almost three years of experience prior to joining Coreview.... read more

Businesses have changed tack since the pandemic started. Agility is the... read more

Managing Queues are an age-old challenge, in many industries. Everybody views... read more

Can data science help insurance to gain a competitive edge

Insurance is one of the largest industries globally, in terms of... read more

“I had told you to send minutes as soon as the... read more

How do I plan a long-term software development project?

Just yesterday, I got the long-awaited message, “The Eagle has landed!”... read more

Since the beginning of my career, I have always worked very... read more

Why the Retailing in Shopping Season 2021 will be different, even from 2020?

In 2020 many businesses pivoted to make quick changes for survival.... read more